Our Quest for a Quetzal 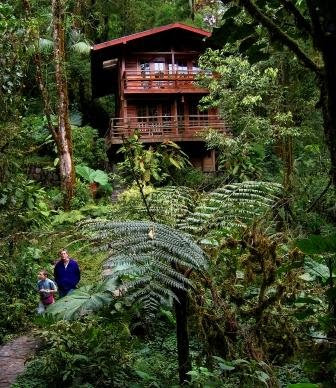 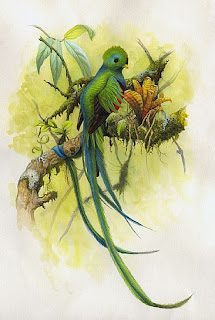 Not so long ago, my wife Kate, son David, and I wanted to see, among other things, a resplendent quetzal. This Central American bird, prized by the Maya for its long, irridescent green tail feathers, is one of the bird world's wonders. It had become, for me, a kind of birding grail. I've failed to see one many times. 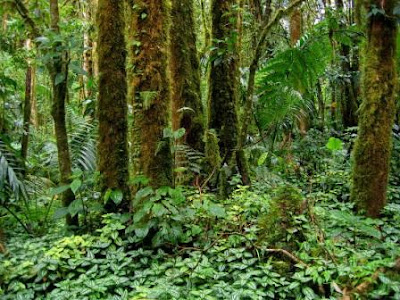 So off we went to Panama, to the slopes of Volcan Baru, a 10,000-foot-tall dormant volcano in the center of a vast national park near the Costa Rican border. The cloud forest there hosts a marvelous profusion of primeval-looking, moss-draped plant life, which seems to grow constantly in the nearly constant mist. And, of course, there were lots of animals and birds. The sheer profusion of life and the mystical, foggy quality of the light makes cloudforests--which are basically high-altitude rain forests--among the most magical places on earth.
We stayed in the cabin pictured above, which was reached from the nearest village by a 30-minute, bone-pounding ride up a rocky track in a high clearance 4-wheel drive vehicle, then a 15-minute hike through the jungle. But there we were at the remotest outpost of Los Quetzales, a lodge and spa that also offers accommodation in several remote jungle cabanas. As we looked out from our second-story porch, several species of hummingbirds flitted among orchids and bromeliads. Brugmansias towered 25 feet or more toward the forest canopy. Tree ferns were everywhere. But no quetzals. 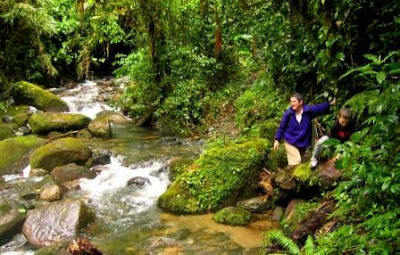 We hiked through a steep ravine alongside waterfalls, across rivers, and saw all manner of birds. And plants, which will be the subject of several upcoming Panama posts, as it was an inspiring locale for anyone who, like me, tries to emulate the dramatic architectural plant life of the tropics in a temperate garden. Anyjungle, we sometimes cooked dinner on the gas stove in the cabana, and always had a wood fire at night. Yes, we were in the tropics, but the altitude made it comfortably cool during the day. On our last dawn in the cloud forest, my wife the artiste and my son birdboy decided to try calling in a quetzal. 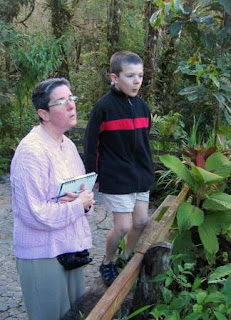 They stood at the edge of the forest, mimicking noises a bird guide taught us. We knew we were in a promising spot, since a nearby tree was covered with some fruitlike stuff quetzals loved. Suddenly birdboy said he saw one. The artiste and I were suspicious that it was more of an optimistic mirage than an actual sighting. After a few minutes, birdboy said he spotted another. More suspicion followed. Then, a quetzal, a colorful male, flew right overhead, trailing its long tailfeathers and showing off its bright red breast. It was like something out of a painting, maybe one by Michael DiGiorgio, whose fanciful image of a quetzal graces the top of the post. The bird's passage was fleeting, but the memory of its beauty lingers.
Posted by Steve Silk at 8:50 AM

A beautiful setting and you got your wish! How wonderful to share it with those you love. Gail

Live the dream! Will we be seeing paintings of quetzals?

Great journey. Multiple eyes seeking the prize sounds like it was the key to the dream realized! What an experience for all of you.

What a wonderful adventure. I loved reading this and seeing Panama in your photos

Hooray! A perfect end for a tree house idyll.

Yes Gai--All in all, a magical moment in a magical place.

Hi Layanee-we're trying hard to live that dream! Aren't we all? I'd have to say quetzal paintings, at least from the Artiste, aren't likely forthcoming. Beautiful though the birds may be, it's not really her kind of subject.

Hey Aerie-el! Multiple eyes certainly were the trick, though when it darted overhead it wasn't much more than an arm's length distant--hard for even me to miss. Love what you do with birds over at the Roost.

Thank you Philip. Panama is a wonderful place--stay tuned for more gardenesque adventures there.

Hi Anne--At the last minute we got outr reward. Hope to get back to that incredible place again sometime.

Hi Steve, just found your site, as well as the gone wild site, just great! I was in Boquete(sp) two years ago, never saw a Quetzal, but I'll go back again, no doubt. I could live in that area-beautiful!Brian

Who knows where to download XRumer 5.0 Palladium?
Help, please. All recommend this program to effectively advertise on the Internet, this is the best program!