More From NYBG: Mum's the Word 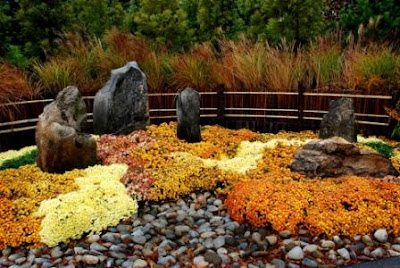 Let's face it, mums are maligned. Many a plant snob sneers at them. They're just so common. Hard to imagine a plant so over used and, often, so poorly used. Usually, they're just thrown about higgledy piggledy to add a garish splash of color. But, hey, I even love marigolds, so to me mums always seemed a plant that just hadn't found the proper calling. Yet.
Anymums, what drew me to the New York Botanical Garden the other day was their seasonal exhibit on Kiku (KEE-koo), the Japanese word for chrysanthemum. Obviously they wanted to show mums in Japanese-tinged scenes. One way they did that was by creating Oriental gardens such as the one above, but what really caught my eye was the creative, intensely colorful use of mums as major players in a kind of fanciful, bed-and-border woodland garden comprised of Japanese plants. Turns out mums and Japanese maples were just plain made for each other. Who knew? Such vivid, rich color harmonies make beautiful garden music. Is there anyone who cannot appreciate the interplay between the fall foliage of 'Shishigashira' Japanese maple (Acer palmatum 'Shishigashira' and the Chrysanthemum 'Colona Orange'? Even the wildly tossed-about blades of fast-fading golden Japanese forest grass (Hakonechloa macra 'Aurea') add to the splendor of the scene. 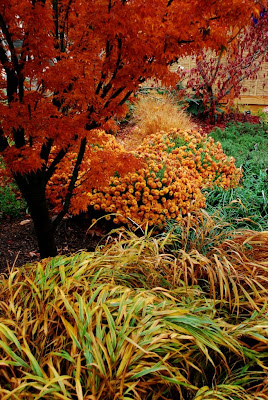 And how about this pair? Not sure of the maple's proper name, or of the mum's. 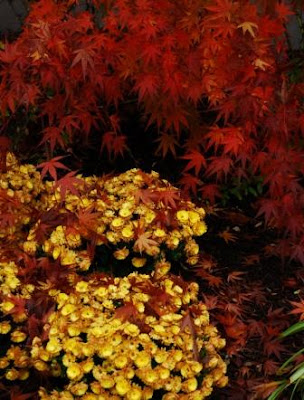 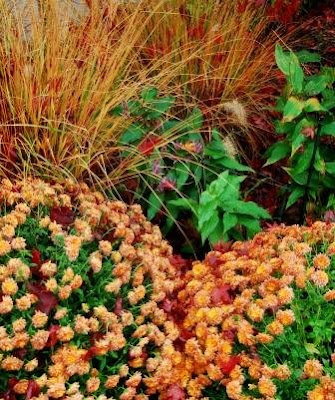 Not a mum in sight, but this Japanese blood grass (Imperata cylindrica 'Rubra') and heavenly bamboo (Nandina domestica 'Gulfstream') made a handsome couple too. 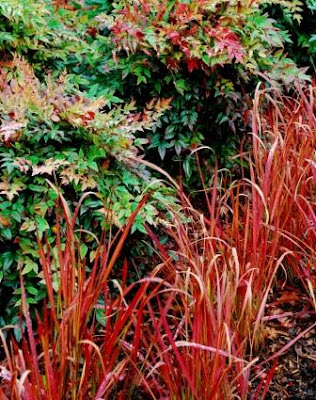 Below is grab bag of other sights. I especially liked the leaves of the Japanese maple (Acer palmatum 'Beni-otake') fallen on the sedge (Carex oshimensis 'Evergold') at lower right. Looks
like something from all fall down. 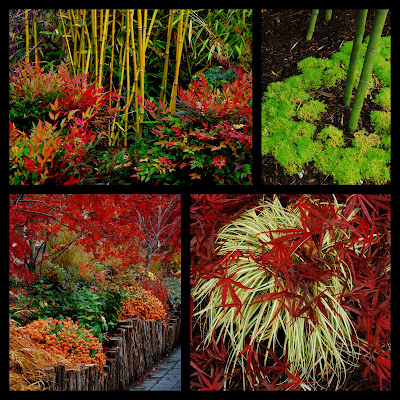 Isn't the kiku exhibit amazing? Thanks for sharing it with all of us.

Hi Zoe--With mums, it's all about what you do with them. But then I guess that's true for almost any plant.

Margaret--I have one more installment of Kiku yet to post, and to me it was the most amazing aspect of the exhibit.

Stunning plant combinations. I love re-visiting plants that are maligned in thoughts on garden taste, and the chrysanthems you show are are stunning planted en masse with the arrangement of rocks.The chrysanthemum is so often depicted in Japanese art, lacquerware etc., that I think their use on a Japanese garden is inspired.
A lovely post!
regards,
Philip

I like any flower that is that happy! Yeah for mums! Kim