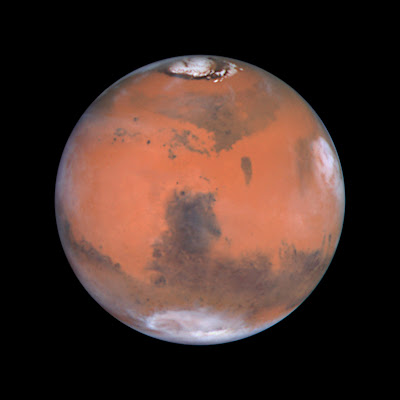 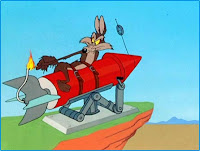 Yo, yo, yo people! We are going to Mars! Yes, we are leaving this tired old, used-up hulk of a planet to the trash heap. Soon enough global warming will bake this ball of space dust into a shriveled-up cinder incapable of supporting even a cockroach. Time to get out of town!
Yes, NASA is working on plans to develop a one-way manned mission to the great beyond. OK, no jokes about who you might like to reserve a seat for, because this is some serious stuff. NASA and DARPA (the Pentagon's Defense Advanced Research Project Agency) have embarked on a mission to build a Hundred Year Starship, a vessel intended to voyage to distant stars and drop off passengers, permanently, along the way. First stop? Maybe Mars.

﻿ ﻿
Hard to say just how serious they are about the plan. So far the two mega agencies have coughed up $1.1 million in start-up fiunds, an amount dwarfed, no doubt, the by the Pentagon's budget for donuts. Still, those in the know say they might be blasting off the first ship in as soon as 20 years. Since we've let the home planet go to pieces, the plan is to get to Mars, carve out a foothold, then terraform the place and start all over again. (Note to self: This is why those fat-cat, greed-monger CEOs and banking execs need to make obscene amounts of cash and don't care about trashing the planet and its people in the process--They're saving up for tickets!)
﻿ 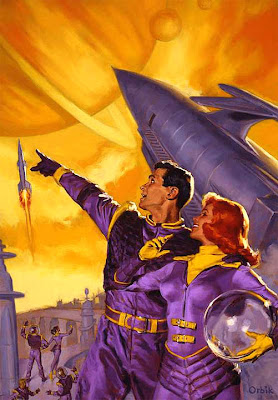 ﻿ Here are a couple quotes from a Popsci story about the effort. (Illo above is "Atomic Avenue #1" by Glen Orbik. Hat Tip: DRB)

“The human space program is now really aimed at settling other worlds,” Worden said, according to a Singularity University blog that covered the event.

Incidentally, thats exactly the proposal in a new paper in press in the Journal of Cosmology, a relatively new, peer-reviewed open access journal. Dirk Schulze-Makuch and Paul Davies suggest sending astronauts to Mars with the intention of staying for the rest of their lives, as trailblazers for a permanent Mars colony.


They would get periodic supply missions, but they would be expected to fend for themselves for water, shelter, nutrients and mineral/chemical processing. They would be expected to develop some kind of homegrown Martian industry, which could ultimately serve as a hub for an expanded colonization program. Plus, leaving some people on another planet would probably ensure that we’d want to go back, to visit them and see what they created.
Thinking about enlisting? Sign up for a tour to see future real estate hotspots such as the Tharsis Volcanic Region or the Utopian Plains. If you like what you see, become a Martian citizen 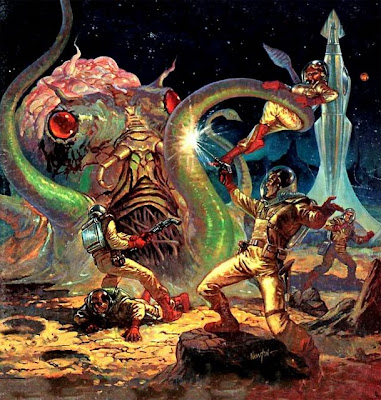 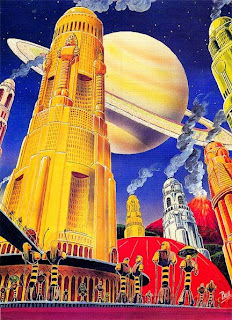 On Mars, new settlers can revive the great traditions of our earthly past. They can slaughter the hapless natives (as in the Donald Newton illustration above), raze the landscape, build soaring cities (like the one envisioned by Frank Paul), and get busy extracting and plunder anything and everything of possible value--like maybe whatever shimmering blue liquid lies lakelike in the crater below (in a scene actually photographed by NASA on the red planet). Then after another couple years, they'll have to head off for the next stop. 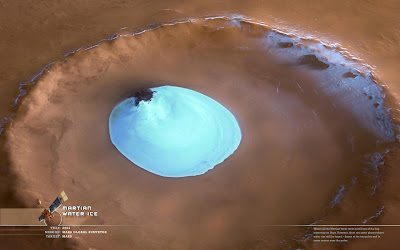 Sorry to rain on this particular parade, er, launch, but a change of address isn't going to solve our problems. No, relocating humanity, even seeding it throughout the universe, is not the answer. We don't need to change our location, we need to change our values. We have to try to live in harmony with--rather than in domination of--the place we call home. Our species managed just that for tens of thousands of years, until fairly recently. How hard can it be?
Posted by Steve Silk at 2:50 PM 3 comments: