Cuckoo for Kiku--More From NYBG 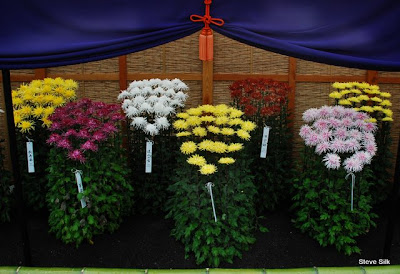 I recently bemoaned the thought that there was no word to express the transitory beauty so familiar to gardeners. Turns out there is one, Hanami, a Japanese expression for the pastime of flower viewing, a celebration of both the transience of life and the beauty of a single moment. The Japanese are famous for their reverence of cherry blossoms, and they have a similar expression of Hanami late in the season, when the chrysanthemums bloom. 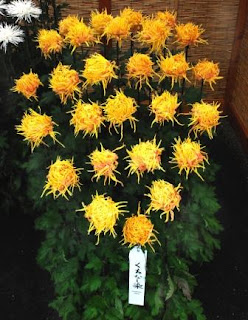 Chrysanthemums occupies a special place in the Japanese psyche: a stylized version of the flower serves as the Emperor's royal seal and to outsiders the seat of Japanese power has long been referred to as the Chrysanthemum Throne. As tends to happen in Japan, the object of veneration becomes the center of ritualistic, almost cultish devotion. And so it has gone with the chrysanthemum. That now culminates in their annual "Festival of Happiness" a celebration of things mum. The New York Botanical Garden recently hosted a special exhibit called Kiku (KEE-koo), to show us what it's all about.
The Japanese bring a near fetishistic fervor to mums and train the plants to do things I'd never dreamed possible. At some point, this kind of pursuit becomes less about the plant and more about the practitioners of the arcane art devoted idealizing the mum. These things are coddled and coaxed There are several different disciplines, At top is Shino-tsukuri, Driving Rain, in which two plants are placed side by side in pot, then pinched and tweaked until they produce 27 flowering branches-no more, no less-whose height is adjusted, just so, to create the slanted circle of pinwheeled flowers. As is customary, they are displayed in their own little bamboo and douglas fir shelter, protected by curtains of imperial purple and a sash tied in a ceremonial knot. 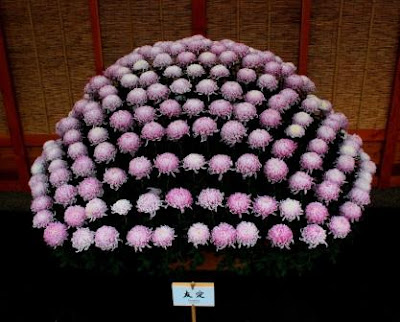 My favorite form, and the most striking visually, was Ozukuri, Thousand Bloom. A single plant is pinched until it produces 5 strong growing shoots, which are in turn manipulated, staked, trellised and otherwise manhandled to within an inch of their life until they produce an exquisite dome-shaped cloud of flowers, each one precisely placed within the overall composition. These things are huge, nearly 4 feet across. It takes 11 months and whole team of gardeners to create one of these tour-re-force mums. The plants even have names. We're looking at Friendship, boasting 229 flowers. 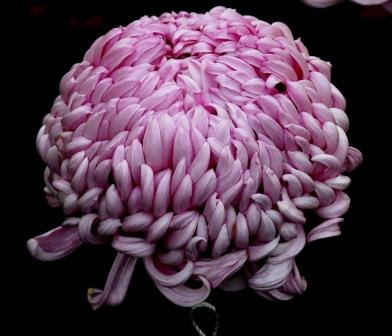 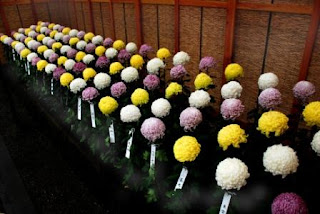 The silliest display was the Ogiku, Single Flower. These are the lollipops of the mum world. Gardeners diligently train a single stem--pinching off all shoots and buds save one, so as to produce... one single flower. But it's a big one. The one we're looking at here is larger than a softball. Plants are then displayed in formation, lined up in ranks, like soldiers. 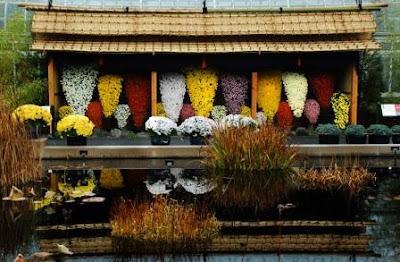 Winner of the windowbox award would have to go to the form known as Kengai, Cascade, in which plants are tickled and pinched to produce a multitude of side shoots which are in turn trained through a wire mesh frame and tied into place. After 10 months, buds begin forming and the frame is lowered into a cascading position. Plants-which are usually raised in pots-are then moved into an Uwaya, the traditional bamboo display shelter that protects these delicate creations from the elements
I found it exhausting just looking at these amazing specimens of...what?...the gardener's art. A friend who's visited Japan about this time of year said the country is virtually overrun with these creations, that they are everywhere, by the thousands, or even tens of thousands. Must be quite a sight. 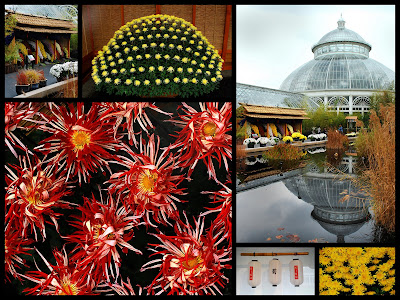 Thought you would probably enjoy this

You're right Zoe, I did. It is a wonderful sentiment, and has such a bittersweet quality, for me anyway. Don't know much about Oriental history, but it is interesting the way China influenced Japan. I always thought of Japan as insular, like it was during its first interactions with the west. Sure would be fun to go there one day.

What a great post... I love the Ozukuri type... I knew the Japanese loved these flowers, but the exacting standards and training is new to me... So otherworldly.
Best regards,
Philip

Thanks Philip--Otherworldly is a good word--they've certainly transformed the humble mum. Imagine the potential results of this kind of devotion to some more dramatic plant.

Wow, sure puts a cool spin on mums! Thank for sharing.