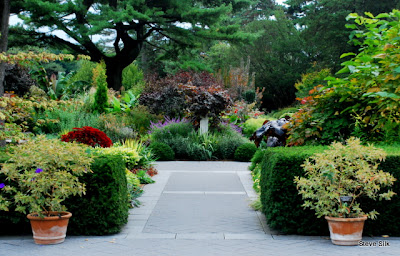 With the garden season winding down to winter, I made a trip to the New York Botanic Garden to get a look at their last hurrah in the Irwin Perenial Garden. It's always a great show, from the large scale of the inviting entryway, to the smallest detail. 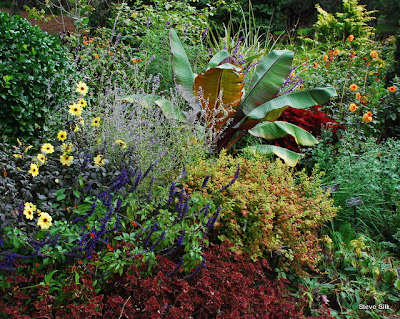 As always, I was on the lookout for sizzling combos created by juxtaposing bold, broad-leafed thingies against more delicate, airy companions. like, for example, the bigger-than-a-bathmat leaves of this banana rising from a surround of Russian sage (Perovskia atriplicifolia) , coleus, assorted dahlias and more. 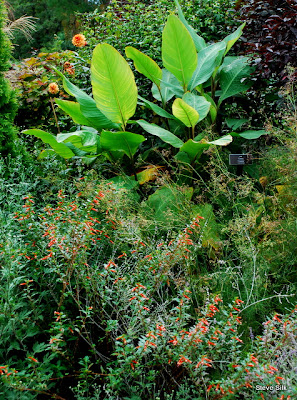 Color ruled the day in this similarly scaled community of canna, accented by an orange swoon of cigar plant (Cuphea 'David Verity'), with its emberlike tube-shaped flowers all aglow in the overcast. Further firing up the scene were the bigger blooms of a few orange dahlias, smoldering like floating campfires. I know, I know...not everyone likes orange. But I do! Unapologetically. It's more accommodating than red, not as strident as yellow. I find it to be at once both fiery hot and pleasingly mellow. 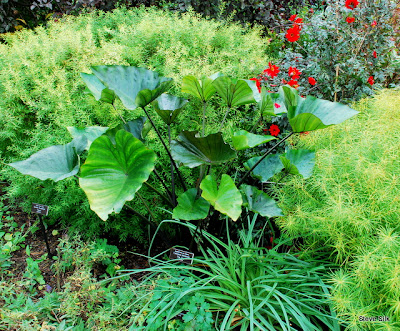 Back to bold, how about these cool elephant ears (Colocasia esculenta 'Tea Cup'), floating above the filmy firmament of thread leaf bluestar (Amsonia hubrichtii) without benefit of saucers? Oh, and a few red zingers, courtesy of Dahlia royalty 'Bishop of Landaff', make the display ever so much more pleasing. 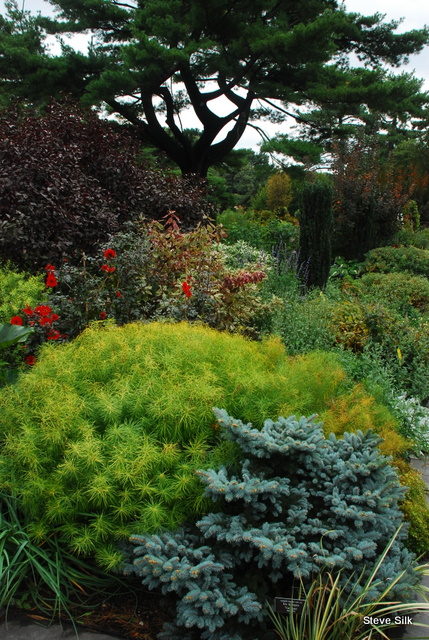 More thread leaf bluestar never hurts this time of year. While many may plant this standout for the galaxies of starry blue flowers that cover it in late spring, I find it far more valuable in fall, when its fine foliage turns a shimmering gold. 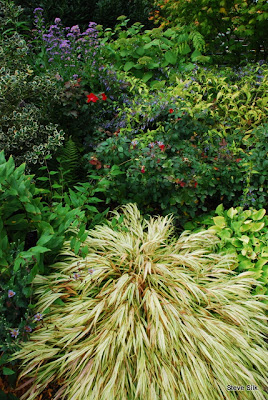 Speaking of gold, if there's a plant that's worth its weight in that precious substance, I'd have to say it's gold Japanese forest grass (Hakonechloa macra 'Aureola'), or any of the similar cultivars that bring so much bling to whatever setting they are placed in. Not only is there that gloooooooooorious color (typo, and it stays), there's the plant's ever-so-appealing lax habit, likened by so many to a waterfall. Long may it flow! 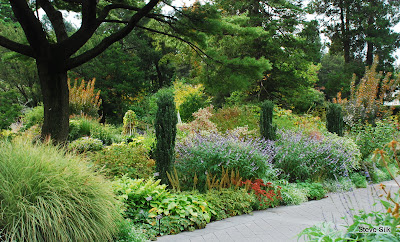 One of the most valuable yet simple garden design techniques is repetition. Repetition. You can never go wrong by adding more than one of a kind, and it gets even better when they are spaced out at roughly equal intervals, or if you're more eclectic kind of gardener, at irregular intervals. My feeling is that regular intervals are best because they bring an element of structural formality to a planting, and the more structure you've got, the freer you are to make merry with the rest of the plants. So, ironically, the rigor of regular repeats are ultimately a liberating force. And speaking of repetition, I'm going to have to get back to this garden soon.
Posted by Steve Silk at 9:00 AM

Ah, repetition... my biggest challenge for some reason. My gardens have no real design plan, so repeating elements would help, but I haven't gotten the rhythm of that yet (I don't think 5 spruces lined up on a berm counts). It helps to see photo examples like you post... thanks!

Hi Steve,
Loved the pictures of the bluestar and elephant leaves with dahlias in background. and then the picture right after it. Looked like a totally different scene, garden, set of plants, but in fact was just taken from a different angle.
Your observation of repetition, constraint, allowing freedom.....Something there, some secret of the universe. ....(-: Probably that insight you got in Paris, 197__ whatever year that was!
Maria Montessori said that a child becomes free through ever widening constraints. If there are no constraints when he/she is young, than an insecurity ensues.
Again, I don't know how these web things work. I thought I was responding to you through my facebook, but somehow, I am in your blog....
Hope you get this message!
Love,
Yvonne

Thanks Laurrie--Yeah, when you have that plant collector's chaaos a few repeating elements can save the day. Plants in pots is a great way to learn about repetition-just plant up a few similar pots and try placing them in different spots. Have fun!

Yvonne-Glad you came by, yes I'm almost certain that particular revelation struck on one of our post-prandial perambulations in the storied City of Light. Seriously though, I think a lot of those experiences percolated through my brain to form the basis of my current aesthetic sensibilites-though I sure never suspected it at the time.