The Ultimate Storehouse for Seeds 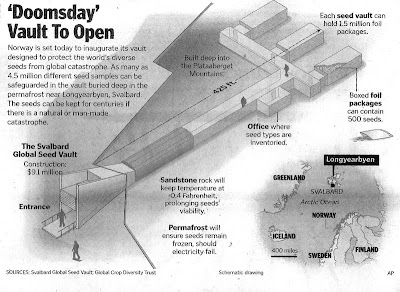 With species of plants, animals, birds and insects and all whatnot going extinct on an almost daily basis, I was relieved to learn last year about the creation of a secure seed bank--the Svalbard Global Seed Vault--on the island of Spitsbergen, way up in the wilds of the Norwegian Arctic. Here conservators store refrigerated seed of virtually all the world's food crops, in essence creating a DNA treasury for Earth's edible plants. Seeds could then be used-in the event of some global catastrophe-to kickstart agriculture. 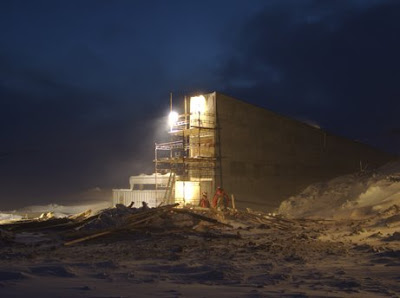 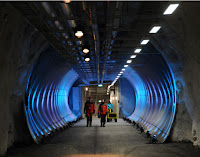 There lots of other seed banks all over the globe, but this one is special. A post on Worldchanging explains it thus: The room is a "doomsday vault" designed to hold around 2 million seeds, representing all known varieties of the world's crops. It is intended to safeguard the world's food supply against nuclear war, climate change, terrorism, rising sea levels, earthquakes and the ensuing collapse of electricity supplies. "If the worst came to the worst, this would allow the world to reconstruct agriculture on this planet," says Cary Fowler, director of the Global Crop Diversity Trust, an independent international organisation promoting the project. To survive, the seeds need freezing temperatures. Operators plan to replace the air inside the vault each winter, when temperatures in Spitsbergen are around -18 °C. But even if some catastrophe meant that the vault was abandoned, the permafrost would keep the seeds viable. And even accelerated global warming would take many decades to penetrate the mountain vault. "This will be the world's most secure gene bank by some orders of magnitude," says Fowler. "But its seeds will only be used when all other samples have gone for some reason. It is a fail-safe depository, rather than a conventional seed bank."
So the seed vault is a wonderful idea. And could anything seem more secure-I mean really, a cave on a remote island in the Arctic? Sounds impregnable to me.
Then I learned that to some researchers Svalbard's security may leave something to be desired. Indeed, to these fearful researchers, planet Earth is not secure enough, There is now a move afoot to create a seed bank on the moon. Really. I am not making this up. 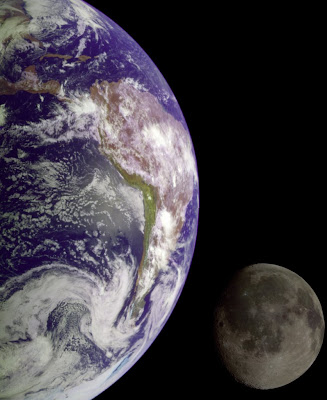 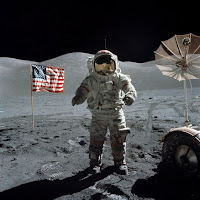 According to an article in the International Herald Tribune, a group known as the "Alliance to Rescue Civilization, or ARC, advocates a backup for humanity by way of a station on the Moon replete with DNA samples of all life on Earth, as well as a compendium of all human knowledge - the ultimate detached garage for a race of packrats. It would be run by people who, through fertility treatments and frozen human eggs and sperm, could serve as a new Adam and Eve in addition to their role as a new Noah. Far from the lunatic fringe, the leaders of the alliance have serious careers: Robert Shapiro, the group's founder, is a professor emeritus and senior research scientist in biochemistry at New York University; Ray Erikson runs an aerospace development firm in Boston and has been a NASA committee chairman; and Steven Wolfe, who, as a congressional aide, drafted and helped pass the Space Settlement Act of 1988, which mandated that the National Aeronautics and Space Administration plan a shift from space exploration to space colonization." 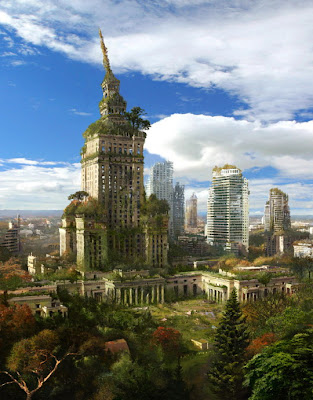 Seems like a long shot, but people are thinking quite seriously about an off world version of Earth 2.0. Now I'm all for the preservation of species, but it seems to me these projects have a serious flaw. Let's say there is some kind of planetary catastrophe--nuclear war, a plague, massive environmental disruption from global warming, or a direct hit from an asteroid. As a result, much of humanity is wiped out. Survivors hope to rebuild. But, how likely are they to even know about Svalbard, or the lunar treasury? And even if they did, how the heck would they get there? Hopefully, we'll never have to learn the answer.
Posted by Steve Silk at 11:49 AM

That's a fantastic idea that they came with. To answer your question, Steve, even if there're no survivors, Mother Nature would bring it up when humans walk on the earth again. Who knows, may be all the seeds that we got now was store by our ancestors million years ago underground?
There are stories of our ancestors preserving precious jewels in ocean beds in our Mythology!
Great Post! I should say THE BEST!

Chandramouli--I love the idea of seeds preserved in the earth--I know a lot of my weed seeds are! And I'd like to think Mother Nature could bring them all round again, but I know humans helped-by selecting and breeding desirable traits-to make many of those seeds reach their potential. Corn,for example, started as a promising little grain and was developed into the crop we know today by the efforts of the native peoples of Mexico and Central America.