A Garden in the Jungle 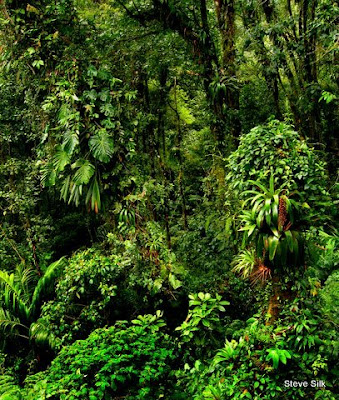 While tromping around western Panama's highland cloudforest, I was immersed in a world of green. This is my favorite ecosystem in all the world. I've visited cloudforest--basically high altitude tropical jungle--in Peru and Ecuador, as well as Panama, and have fallen in love with the cool temperatures, eternal mists and clouds, the soft rains, and the explosion of life that characterize such places. The profusion of plants--their sheer numbers and the incredible variety--makes this a magic land for a plant geek. The reason the Artiste, Birdboy and I were visiting this realm magical was to fulfill a birding quest of sorts, which I wrote about in Quest for Quetzal. But for me, the journey soon became less ornithological, and more horticultural. Or something. 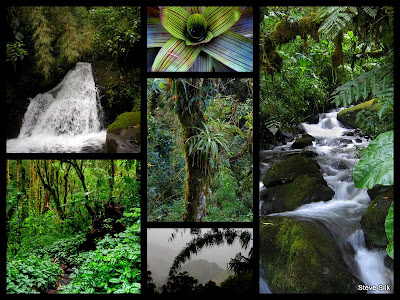 Anyway, as I said, I was nearly overwhelmed by the abundance of plants and their exotic qualities. Some of the plants were familiar to me from my home garden-brugmansias, elephant ears and tree ferns, for example, but on a scale unknown to me. The angel's trumpets (Brugmansia spp.) were maybe 30 feet tall, and draped with mossy tendrils. The tree ferns, well, they were actually trees! And there were others I wished I grew, primarily gunnera, which I cannot keep alive even long enough to get it home from the nursery (a gunnera's unfurling leaf and floral plume, below). Not to mention the heliconias, orchids and gingers. At first, it was all just a blur, a vegetative mishmosh. 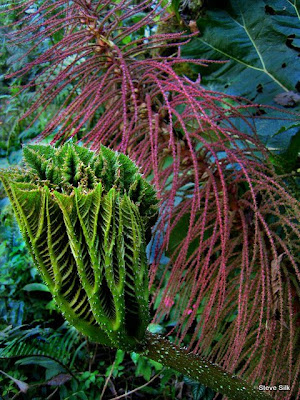 But was we wandered the trails of the vast Parque Internacional La Amistad, rambling along rushing mountain streams, picking our way down into sheer-sided valleys, and cresting ridgetop vantage points, it became apparent that there was a method to the green madness. In fact the closer we looked, the more it seemed as if the cloudforest was the work of some fevered gardener. We paid attention, and soon began to notice beautiful plant combinations, like this streamside elephant ear and fern. That pairing of richly contrasting forms is just the effect a gardener might seek, but this combo, set against a roaring, rushing stream, was far more sublime than anything human hands might create. 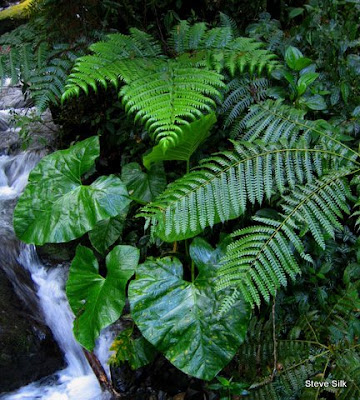 Somehow, there were even groundcovers punctuated by beautiful ferns, a scene I might have tried to create in my own garden. Don't know what the groundcover is, but I'm sure I've seen it as a houseplant. 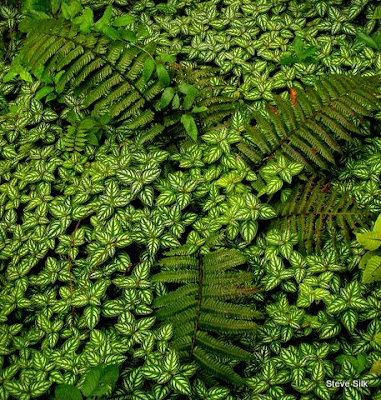 Seeing such examples of the gardener's art occurring naturally amid the vegetative swirl of a cloudforest really got me thinking about the fragile boundary between what's wild and what's culitvated. It renewed my belief that nature is the best instructor for matters horticultural. From it, we take what lessons we can, and apply them as best we're able. And seeing the exuberance of this Edenic, primeval place reminded me that it never hurts to invite a little wildness into even the most carefully planned garden. Randomness can be your friend. Because even the jungle is a garden.
Posted by Steve Silk at 9:14 AM

Everything is so lush. Thanks for taking us along on your adventure.
Donna

I was going to say... are you trying to kill us frozen folk with an overdose of chlorophyl, but then I remembered a student today said... "It is like a jungle inside your classroom."

What a luscious post...it made my winter weary heart go pitter pat!!!

MNG-Lush? That's for sure. You can almost hear the plants growing!

Wayne--Jungles are good-in Panama, classrooms, or wherever they can be found. Wish I was in one right now.

Thanks IF--Coming up, there's to be another chapter from this odyssey. Stay tuned!

I am just learning how to garden in the jungle, a lot different than gardening in Montana. I am staying on Kauai, the Garden Isle - discovered your great post and loved the article and excellent photos. Thank you for sharing. Your are a motivation.