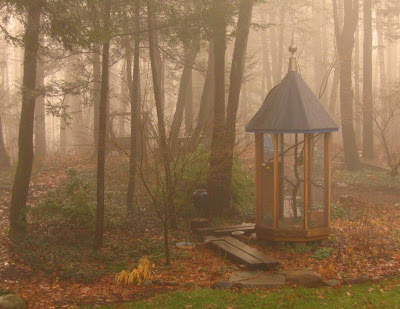 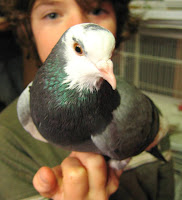 Birdboy has been at it again. We got some new birds. We went to a pigeon show not long ago, checking out the idea of getting some kind of homing pigeons, so he could have some pet birds that could fly free. Some guy he befriended wound up giving him two pairs, saying he liked to encourage kids to get into...what pigeonry? Pigeon keeping? Whatever, while the four newbies will be able to fly free this spring-provided we let them out when they're hungry and don't feed them until they return. We are really interested in subsequent generations, who will be imprinted on their home coop, and so will always return. We actually got rollers, birds who perform tumbling acrobatics while circling overhead. It's amazing the variety of pigeons--we saw many weird, mutant breeds--with pinwheel feathers, fluffy plumage, outlandish colors, enormous chests, or stubby beaks--who were quite showy but unlikely to survive out of captivity.

For now the newbies are living in the aviary (pictured before Arctic conditions bulldozed their way into these parts), which is otherwise vacant for the winter. But that means we need a new house for them, so I'm building a kind of ornamental coop from which they will be able to come and go. Winter construction is a slow process, but I'll show off the new cool coop when it's ready. 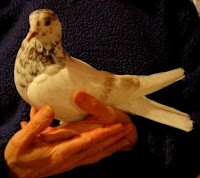 The new acquisitions didn't make my wife, the Artiste, altogether happy. Birds in captivity are not her idea of a good thing, but she's kind of resigned to Birdboy's passion for feathered friends. It helps that these will be able to fly free, and soar when they get the urge. She's holding one that Birdboy named Acceptance--maybe you can guess how that name came about.
Posted by Steve Silk at 8:44 AM

I found your blog when hunting for container gardening blogs.

Welcome Brad-Glad you came by. Container gardening is one of my top garden passions.