The island of Socotra is where Sinbad the Sailor landed to seek the Rukh, a bird of prey big enough to carry an elephant in its talons. The Rukh remains elusive, but Socotra abounds in surpassingly strange life forms. This isolated archipelago in the Arabian Sea near Yemen is home to a host of utterly bizaare plant life, much of which is found nowhere else on earth. UNESCO just named the entire Socotra island chain as a Natural World Heritage Site, a wonder of the world. The photo below, by Jan VanDorpe, shows a Dragon's Blood Tree (Dracaena cinnabari). Its red sap was thought to be dragon's blood and was prized by ancient Greeks, Romans and others as a dye and for medicinal use. In Medieval times, it was used in magical potions and alchemical concoctions. 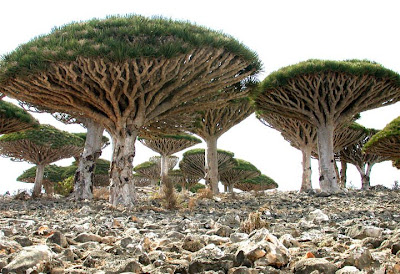 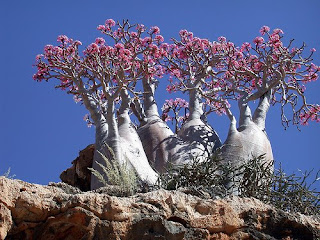 Thanks to eons of isolation, and the necessity of adapting to extremes of heat and drought, Socotra-sometimes called the Arabian Eden for its abundance of life amid the harshest of climates-abounds with other plant oddities. How about this caudiciform bottle tree (Adenium obsesum ssp. Socotranum)? For a more in-depth look at seriously strange Socotra, stop by the most alien-looking place on Earth.

Oh my! I just love this kind of stuff!
What an exciting post!

Philip--I like this stuff too. Weird places like this are what triggered my ongoing facscination with the plant kingdom.