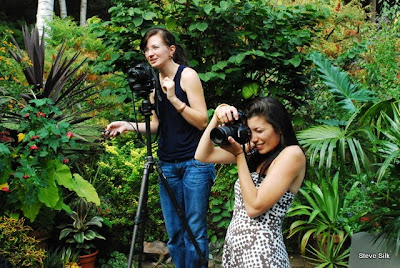 I worked several years as the managing editor at Fine Gardening magazine, and for many more as a contributing editor, so I wasn't too surprised to get a call from the most-excellently-named associate editor Brandi Spade (left), who'd run across an old photo that included part of one of my pergolas (I've since built several more). Anyway, she needed pictures to accompany a story she was developing about pergola-making, so she and newbie editor Ann Stratton arrived yesterday for a pergola photo blitz.

Below is my best-looking pergola, its entry framed by a few colorful, tropicalesque pots. Any structure adds a synergistic effect to a garden, with enduring bones that create a strong dialog with the more ephemeral plantings that surround them. And any structure looks good all year. I value pergolas, especially, because of the way they soften the transition between indoors and out. Under cover of one, you're sort of betwixt and between, not really inside, not really outside. 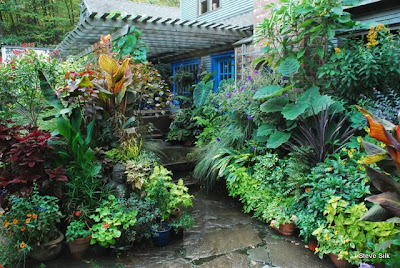 Best of all, the inner sanctum of a pergola is what Julie Moir Messervy refers to in her superlative book "The Inward Garden" as an archetypal space, a place that resonates with the magic and mystery of the settings we loved as children exploring our new world. I used to love making forts under the forsythia bushes, so it's probably no accident that a plant-draped, sheltering kind of space is still deeply satisfying to me. I don't know whether Julie would call this a "cave" or a "harbor", or even an "island" (for its feeling of separation from the rest of the world), but what matters is that the cover of the pergola provides me a meaningful retreat. 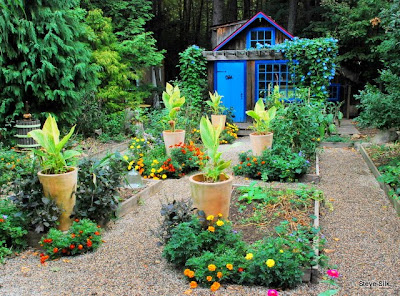 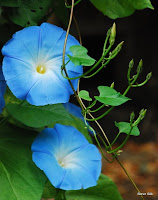 Because I like pergolas, and the feeling they give me-by inviting me, from the outside, or the sense of security and embrace they provide from within--I've got a few. My veggie garden, though worn out by now, still looks inviting thanks to the pergola attached to my garden shed. Those morning glories-'Heavenly Blue', what else-provide a pleasing echo to the shed's blue hues. By the way, if there is any way to get a truer, long lasting blue into the garden, or anything better than this plant-and-forget-about-it morning glory, please let me know. 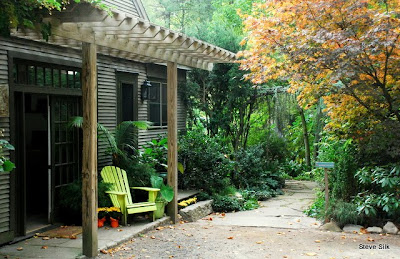 Finally, there's my entry way pergola, last to be built, but not least. Slowly but surely it is being covered by climbing hygdrangea, but in the meantime, it frames our doorway and the garden entry. And eases the in/out transition. Like the others, it is of very simple contstruction. I contemplated making it fancy with lots of layers and ornamental cuts, but in the end decided I wanted to stick with the architectural vernacular of the house. Its staunchly colonial, salt-box style would be compromised by anything else. Far as I 'm concenred, the only rule worth having for pergolas is this one: Make your plans, then use wood one size up-6x6 uprights instead of 4x4, 2x8 rafters instead of 2x6, etc. As with so many things in the garden, bigger is almost always better.
Posted by Steve Silk at 9:44 AM

Your pergolas are inspiring, Steve. I've got a few places that could benefit from one too. I'll be looking for yours in a future FG issue.

Thanks Pam, I've seen lots of great structures in your gardens too-both of them. I'm sure you're glad to be down, officially, to one. Congrats on the house sale.

Interesting topic...The gardening industry have never really pushed Pergolas on to us like they did with Wooden Decking.
I think they may have missed a trick, especially when we can clearly see the beauty offered by yours.

Hi Steve. i have just come across your piece of paadise and am totaaly enchanted by your potted pleasures in your sidebar above! Also the combinations are just so amazing. Wow thrilled to find you. Loads of wonderful inspiration.

Hi Steve. i have just come across your piece of paadise and am totaaly enchanted by your potted pleasures in your sidebar above! Also the combinations are just so amazing. Wow thrilled to find you. Loads of wonderful inspiration.