In the Galapagos: Change We Can Believe In 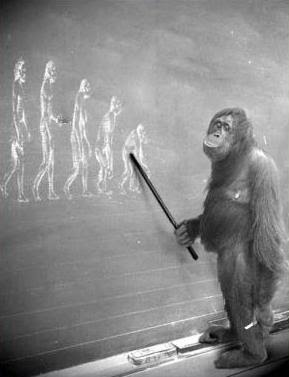 Just about everybody knows the strange Pacific Ocean islands of the Galapagos were the jumping off point for Charles Darwin's theory of evolution.Those isolated bits of land seemingly adrift in the vastness of the Pacific offer a glimspe into the crucible of life and, literally, a textbook study of the concept of natural selection. The island birds, esp the finches (such as this cactus finch on Genovesa, aka Tower Island) and the mockingbirds, have evolved distinct species on different islands. 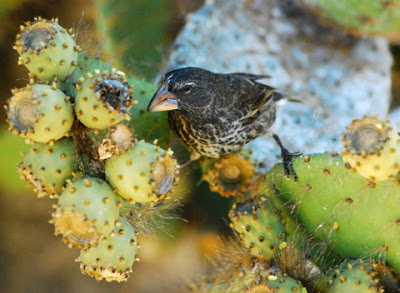 So, when we think of evolution, we tend to think of the animal kingdom, but the Galapagos also reveal a slower kind of evolution, the gradual transformation of barren volcanic rock to rich rainforest. Look how it all starts in these islands, which, like Hawaii, are the result of a hotspot, a leaky hole in the Earth's crust far below the surface of the sea. Lava oozes out of the hole and over the millennia forms massive mountains The tips gradually emerge from the sea to become islands, the Galapagos Islands. 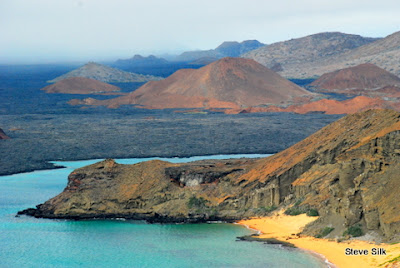 Soon, the lava cools. Colonies of aptly named lava cactus appear. This rugged pioneer plant is one of the very first to grab a toehold on the forbidding, sun-baked lava flats. Gradually it spreads its roots into the lava, cracking it apart, and beginning the torturously long, slow process of turning stone into soil. 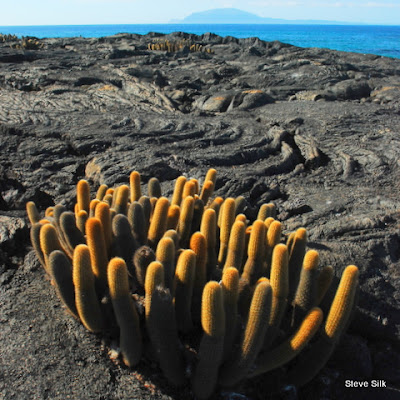 As eons pass, sea life washes up onto the lava shelfs to die and decompose, adding nutrients to the soil. 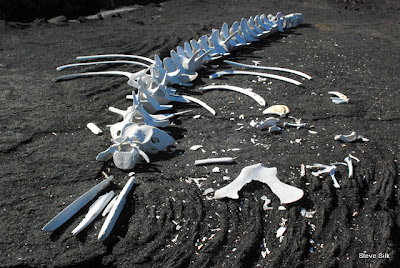 As the lava slowly breaks down to a sandy substance, the little, silvery whiskbrooms of tiquilia arrive. 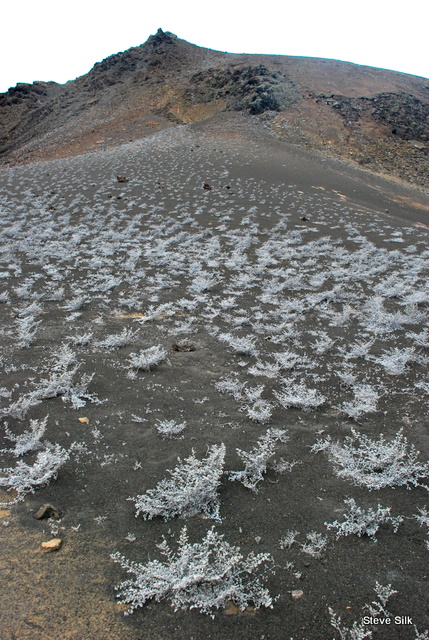 Color arrives as soil is enriched by the decay of pioneer plants, animal matter and the like. The era of grasses dawns, along with thorny shrublets and mats of sesuvium, a succulent that turns fiery colors in the dry season. Land iguanas love to prowl through this stuff. 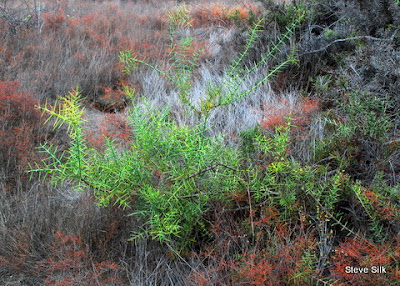 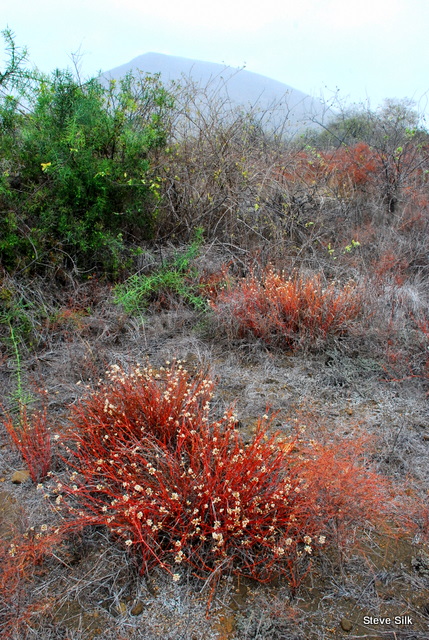 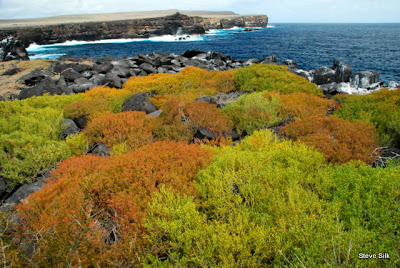 These amazing creatures look utterly prehistoric and exhibit amazing diversity, lumbering past in a paintbox set of hues comprised of yellows, reds, and oranges. 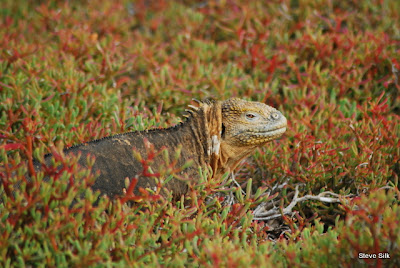 Trees rise. The Galapagos are parched during the dry season, when trees such as palo santo, the holy stick, drop their leaves. It leafs out and blooms around Christmas, with the return of the rains, Palo santo is related to frankincense, and its sap contains an aromatic resin burned in mainland Ecuador's churches as incense. 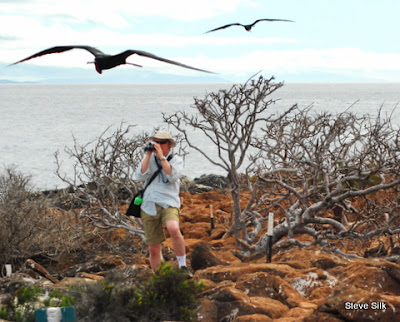 Along with the trees, a variety of cacti begin to reach for the sky. 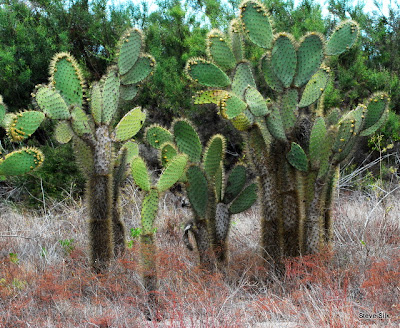 Among them are various prickly pears, which here rise to exceptional heights. Their towering stature is due to another freakish characteristic of life forms that have evolved in island isolation over many thousands of years, gigantism. Think of Komodo dragons, the famed Galapagos tortoise (similarly sized tortoises can also be found in the Aldabra islands, an isolated archipelago in the Indian Ocean), or, heck, even King Kong. In the Galapagos there's a bit of a chicken-and-the-egg question that goes with gigantism--did the prickly pear get big to keep its fruits from being consumed by giant tortoises, or did tortoises grow big to reach more prickly pear fruit? Maybe it's an exotic example of symbiotic co-evolution. Life begets life. At some point, the diversity of plant and animal species increases and, as if through some synergistic magic, increases yet again. The older islands are actually quite green and diverse, while newer bits of land are still baked lava crust supporting a paucity of species. For most of the birds for which the Galapagos are so famed, and for many of the other critters, the islands aren't much more than a place to nest and take a rest--all their food comes from the surrounding seas. At any rate some day, as here in the highlands of Santa Cruz, the islands support a rich, almost rainforest abundance of life. Thus, a new Eden is born. 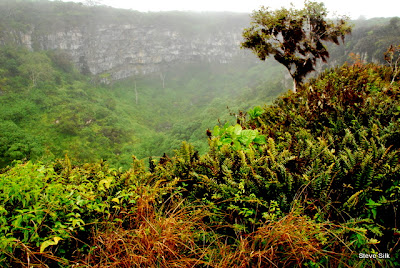 Thanks to both of you. I am fortunate to have had the chance to visit such an amazing place.

nice pictures! thank you for this information!
I want to go to a Galapagos islands tours with all my family. I hope I can go!