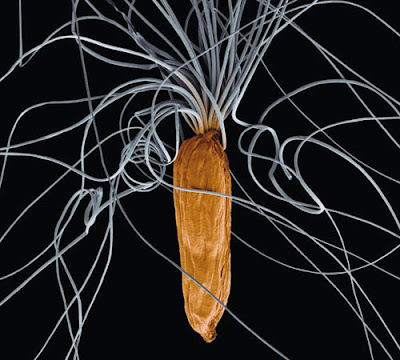 Ah, the splendor of a seed. This time of year, I'm thinking a lot about seeds, being as I'm planting them by the hundreds, or even thousands. I often regard them as little spaceships, launched out like interstellar explorers into the vastness of our atmosphere to find a new home, to settle and take root. And so the species survives for yet another generation. 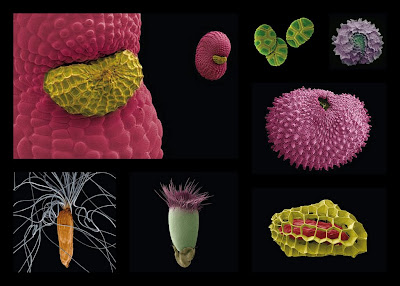 That idea, writ large, is basically the notion behind seed banks, which intercept those little spaceships before their flight has begun and then preserve them for some future day, when the species may be endangered and will need all the reinforcements it can get.
Climate change, habitat destruction, exploding human populace-there are lots of reason to take dramatic steps--now--to preserve species that may be in danger of disappearing from our planet, and worse, from the treasury of its varied DNA. Seeds banks are perhaps the best way to do that for plants, since each little seed is a microcosm of the plant itself, a blueprint for life encapuslated in something that can be as large as a coconut or as small as a dust mote. 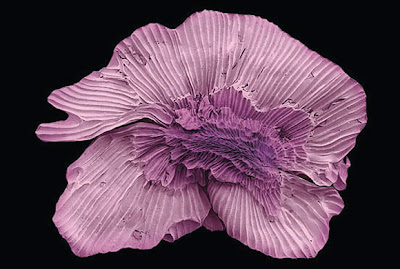 Kew Gardens has embarked on a mission to save seed of as many plant species as possible,
hastened by the recognition that perhaps as many as 100,000--100,000!!!--species are threatened. They estimate that EVERY DAY four new species are threatened. Since virtually all life on earth is dependent on plants, those statistics do not sound promising. So far, the seed-wranglers have rounded up about 30,000 species, so they have lots more to go. All I can say to the folks at Kew is "Godspeed!"
To learn more about Kew's efforts, visit their fine website. The Electron micrographs from this post were taken by Rob Kesseler and Madeline Harley--see more here--and their book "The Hidden Sexuality of Flowers."
For a more cogent explanation of Kew's efforts and some sense of why it matters, let the folks at Kew tell you what they're up to, they can do it far better than I.
Shout out: The Daily Dish
Posted by Steve Silk at 9:05 AM

thanks for sharing this important topic with us. I am going to check out their site today. Great photos too.

wow ... thanks for sharing. I've never seen most of the seeds shown here.

This is so cool. I remember you talking about the seed bank in the ocean bed last year and thank you for further info. How cool an idea! Glad someone came up with one.

Thanks flowrgirl1--It is an important topic, and I'm only too happy to share. It certainly makes you appreciate how magical a seed is, and the importance of its contents.

Blossom--Those electron micrographs are simply amazing. I should have ID'ed the seeds so you'd know what they are...the cool, big stand-alone pink seed is a Paulownia tomentosa--I've got one growing in my yard but since I cut it to the ground each spring to encourage the growth of gigundo leaves, it's never flowered and I've never seen a seed.

Hi Chandramouli--I'll always write about interesting seed bank projects when I run across them-it's a vital effort in a world that's changing as fast as our own.