It’s that time of year-you know, list time. “Best of” lists, “worst of” lists. Everybody’s making them: film critics, book critics, gourmands, travelers, and in this case, a gardener. I’ve been thinking about plants that really pay the rent, plants I’m really enamored of this year. Some are old favorites. Others are new discoveries. Some are oldies that I’ve been able to think about in a new way. All of them will make big contributions to next years’ garden. So without further ado, my highly subjective list of the 10 best plants from 2008. 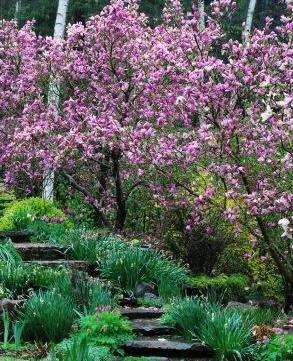 Magnolia 'Ann'--I guess everybody’s got a genus or two they are especially fond of. For me, it’s magnolias. Which I love in part for their antiquity--magnolias were among the first flowering plants on planet earth. I’ve got about 20 in my garden, from little ones, like M. ‘Golden Gift’, to brawlers like M. obovata. Whatever, I value their spring flowers, for profusion, beauty and in a few cases scent. I even like them after they’ve gone by—their litter of fallen petals creates one of those goosebump-inducing transitory beauty moments. The trees are wonderful in winter when their silvery bark shines against an icy blue sky. Even the swollen fuzzy buds are attractive, like giant pussy willows. Among my very favorites are those in the Little Girl series of hybrids, which are sized for home gardens and reach somewhere around 15 x15 or so. I’ve got Ann-(which dominates the cluster pictured above); who fools all who see it by blooming, ever so lightly, throughout the summer. Jane’s a looker too. 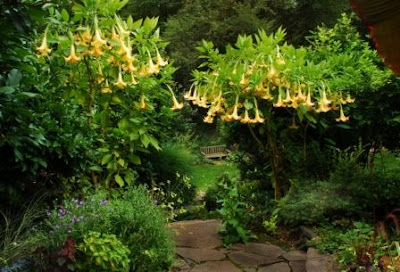 Brugmansia ‘Charles Grimaldi’--If ever there was a plant worth fussing about, it’s this angel's trumpet. Having them in my garden is quite an effort as they need to be hauled in each fall--in a process a described here—and set out again in spring. Then they benefit from babying—lots of water, plenty of fertilizer. But they repay those efforts handsomely with each flush of bloom—and I usually get at least four a season, each one bigger and better than the last. Perhaps the only thing more remarkable than the scads of foot-long flowers is their scent –utterly transporting. 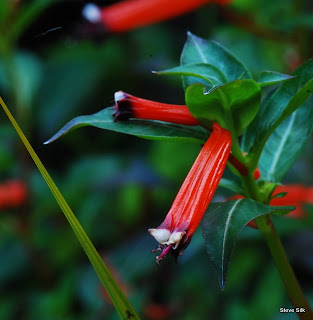 Cigar flower (Cuphea ignea)—I’ve always liked cupheas, as elements in mixed containers, as edging and even, now and then , as a kind of specimen. But this year is the first year I grew them from seed, and I’m here to say that is something I’ll be doing again. Sure one or two or three cupheas is good, but 20, 30 or 40 is even better. I’m going to be using cigar flower (Cuphea ignea) as edging, as groundcover, and just generally in abundance . Getting the plants from seed makes that proposition inexpensive enough to be possible, and cutting costs is going to be a priority for me this coming season. Plants my not grow quite as large as a nice 4-inch nursery specimen but they cost pennies apiece instead of $4 or $5 four. I’m also going to be starting seed of another tender favorite Hibiscus acetosella, with its glossy, Japanese maplelike leaves. I hear it’s also fast and easy. 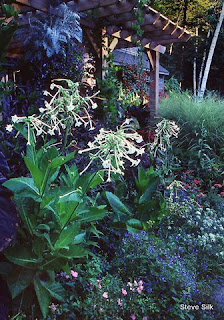 Woodland Tobacco (Nicotiana sylvestris)—there’s no such thing as too many flowering tobaccos (Nicotiana spp). The species I grow may change from year to year, but I’ve always got several representatives of the genus going. One I am never without is woodland tobacco, a statuesque plant to 5 or so feet tall, it boasts big broad leaves about the size of a dish towel, and its stems are topped by a fireworks burst of long white tubular trumpets, each one blaring a sweet, sweet scent from dusk on into the night. I’m not that fond of white in the garden, but I take room for these guys. The flowers look better during the day than those of the even more fragrant Nicotiana alata, and the plants are bigger too. To know them is to love them. BTW, another Nicotiana always in my garden is ‘Ondra’s Green Mix’. I get seed for these green flowered hybrids through the Hardy Plant Society/mid-Atlantic Group, which in turns gets it thanks to my fellow Gardening Gone Wild blogger Nan Ondra, who donates enough to share. Thanks, Nan! 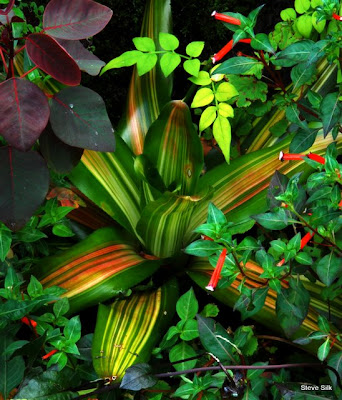 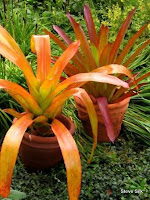 I lust for anything bromeliaceous-Alcantareas, Aechmeas, Guzmanias, Neoregelias, Vriseas, heck, even Tillandsias. I find their strappy foliage irresistible, and oh so easy to use in combination with other more finely textured plants. And they have an architectural grandeur of their own, so I always have a few in pots all by their lonesomes. Most folks in my part of the world grow these—if they grow them at all—as indoor plants prized for their colorful flowers. Not me, I go for the cultivars with colorful foliage, and any bromeliad-type thing that’s got it is fair game. Orangey, bronzy Aechmea ‘Patricia’, for example. Wowsa! 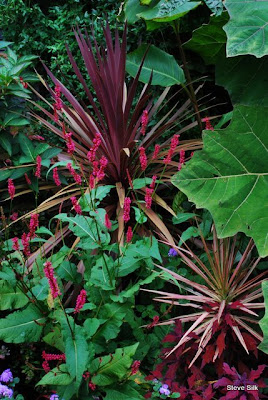 Another type of plant I’m enamored of—a type with a certain "look" as opposed to a specific genus or species—is any that call to mind a star on a stick, Cordylines being the best examples, though many Dracaena are good too. What I like about these things are the unexpected blast of texture they provide to almost any planting. I was first intrigued by this look after planting some Allium christophii, which make a similar starburst, though on a smaller scale. The easiest way to get these is to go to a Home Depot or a Lowes and get some Dracaena, which are usually sold as houseplants. The tricolor version, with pinks, creams and whites, is a stunner. And so are any of the cordylines, though you often need to grow them a few years before they are tall enough to have impact in a border—the good news is that you can use them early on in containers. 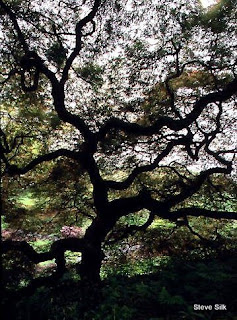 What’s a garden without Japanese maples? These four-season beauties have fantastic structural branches, beauteous summer foliage , great fall color, and if you get the right cultivar—Golden full moon maple (Acer shirasawanum ‘Aureum’), for example-spring buds and, later, seedpods that are attractive as any flower. It doesn’t matter whether it’s a Cousin It maple, shaped like the hirsute mound from the Addam’s family, or a more upright variety. It’s hard to go wrong with any of them. 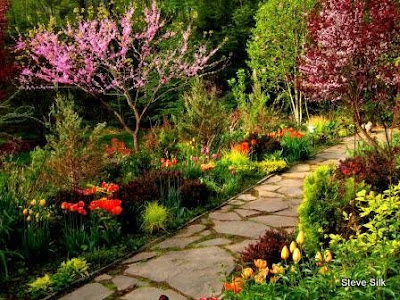 Tulips are another plant I just gotta have. I plant several hundred every fall, and when their swaths of bold color erupt in spring, I’m glad I made the effort. After our long monochromatic winters, by spring I’m simply starved for color. And tulips provide plenty. Not only the tulips themselves, but they compliment emerging colored foliage of other shrubs and perennials, which is usually at its best early in the season. I like planting the bulbs in clusters of 5 to 15 or so in order to create blocks of color. I also usually plant only a few cultivars, so the colors repeat through the garden. Using about half early flowering varieties and half late tulips really spreads out the season. I treat them as annuals and yank the bulbs after the show is over. Planting new ones each fall makes it easier to change color schemes from year to year. 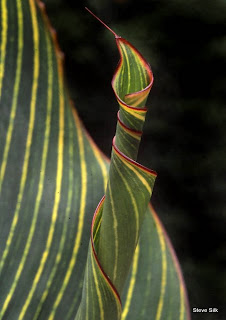 Cannas are key players for me. The broad architectural swaths of their paddle-shaped leaves make these plants indispensible as building blocks in all kind of combinations. I don’t grow them for flowers. In fact I often clip of the sometimes garish blooms, since their outlandish hues can wreak havoc with delicately wrought color combos. No, I grow cannas for the leaves alone. Favorites include hybrids such as 'Tropicanna', 'Pretoria'-love the burgundy pinstripe along the edge of each leaf, and 'Australia', and straight species Canna musafolia, the lofty, mighty leaved Paul Bunyan of the canna clan. 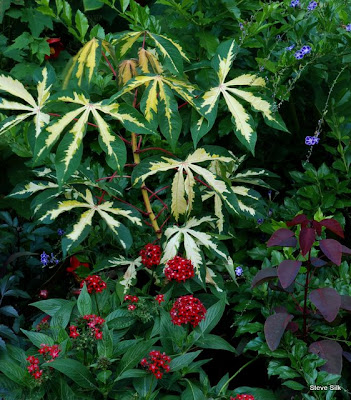 Ever heard of variegated tapioca (Manihot esculenta 'Variegata')? I can’t imagine why not. It must surely be one of the most beautiful plants in cultivation. Its gorgeous hand-shaped leaves, lushly variegated with irregular creamy yellow centers, are attached to the plant’s upright stems by red petioles- you know, the little thingies that link leaves to whatever they’re growing out of. These color suggest all kinds of zingy plants for making utterly awesome color combos. Tender, hard to find and kinda pricey, but well worth it.
Posted by Steve Silk at 9:38 AM

Your garden is so colorful and spectacular. It is such a pleasure to look at your plant combinations.
Nicotiana is a favorite of mine, too.
Best regards,
Philip

I had to see your list! I was pretty sure it would be stellar and I am not disappointed. What an interesting collection of lush, colorful plants with strong personalities. While they are all very attractive...most make little sense in my cedar gladey garden....too bad, I do like those magnolias! But that doesn't stop me from admiring how wonderful they look in yours.

The list and the photos take my breath away! And give more ideas of what to find to plant...

Thanks for including the link to the process of hauling in the Brugmansias if you have them in the ground. I'm thinking of planting mine in the ground this spring. I don't think they've been as productive in pots.

And tapioca (food) and variegated (plants) are on my top 10. No surprise variegated tapioca is now too!

I admired variegated tapioca in Dee Nash's garden last summer. I may have to try it in mine this year--in deer-safe areas. I love cupheas too and in my former garden grew C. ignea, C. llavea, and an unknown pink cuphea. Great plants!

With my new house, I inherited a lovely Japanese maple and a couple of cordylines. I like the way you incorporated the cordylines in your garden. Thanks for the inspiration.

Thanks Philip--you know, I've never met a Nicotiana I didn't like, even the ones grown for smoking have some neat ornamental attributes.

Gail-Glad you liked the list, surely it wouldn't fit in a cedar glade, though the magnolia and Japanese maple might feel right at home. I have a kind of shady glen I'm going to be working on; it would host an entirely different population than my full sun tropicalesque area.

Aerie-el--Brugs in pots need lots of water and lots of fertilizer. But out where you are I bet you may be able to keep them in the ground year round. In their native habitat they grow in places that get pretty cool,though I guess not places that get snow.

Hi Pam--Those tapiocas would love some of that Texas heat. They probably really thrive down there--they'd look good with the cordylines too.

WOW Lovely!!!!
I Love your photos of your garden.
Linda

Thanks Linda-It was nice to be able to show a few different areas in one post. And my favorite plants to do a lot to dress up a spot.

Steve.. is it ok for me to add your blog to mine?
I allreddy done it but thought that it would be polite to ask...
So if you say no.. i will take it away.
Linda

Linda--I would be honored if you add me to your blog! Thank you so much!