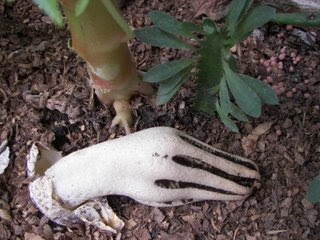 It came from the compost, says Indonesian blogger Fendy. This very strange plant, which Fendy says smells like dead fish or a dead rat, clawed its way out of the ground, so to speak, at his garden in Surabaya, on the island of Java. He surmises the fungusy, mushroomlike plant grew from seed laying dormant in some compost he'd spread in the garden. It looks, he writes, like the hand of a zombie trying to dig its way out of the grave, so he dubbed it Zombie Hand. In spite of the stench, Fendy is going to leave the plant in his garden. "Our curiousity however, doesn't let us to remove it, because it may turn out to grow into some interesting plant," he writes. Um, Fendy--it already has. Thanks and a tip o' the hat to Dark Roasted Blend.
Posted by Steve Silk at 4:08 PM

whoa! Is this true? I thought it was a ceramic hand when I looked at it. If I look 'really' hard I can kind of see a 'mushroomy' material--wow, that's really interesting! great post. Jan

I'd definitely start if I'd encountered something like this near the compost!

Ewww... I thought it to be some garden decoration! LOL! Interesting...

That is plain old creepy-looking, and thus fascinating. Looks like the hand of a Wraith (Stargate Atlantis) emerging from the earth. Creepy. ~Aerie-el

Hey TF2D-It's true near as I can make out. On Fendy's site there are other photos, and it looks authentic. Indonesia's biodiversity never ceases to astound.

Lost-I think I'd start if some hand was reaching out from my compst pile. Yikes!

Chandramouli, well I guess it is an ornament of sorts. A scratch-and-sniff treat!

Hi Aerie-el--Yes it's exceendingly creepy. Sounds as if you have a good sci-fi handle on it though. Hey, it's a movie! "Creature From The Compost"