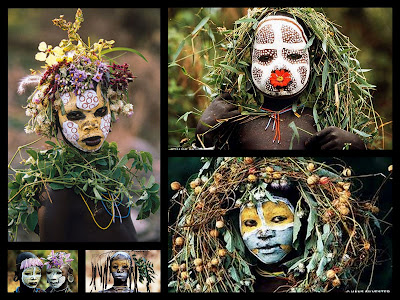 Clothes make the man, or so it's been said. But what about plants? The Irish talk about the wearin' of the green, but long before there was any concept of Irish, or really, any concept beyond tribe, fops flaunted foliage and flowers as finery at just about any significant gathering, just as these kids are doing in this set of phenomenal photographs by Hans Silvester taken among the Surma and Mursi tribespeople of Ethiopa's Omo Valley. Loads of these dramatic images are collected in Silvester's book, Natural Fashions. 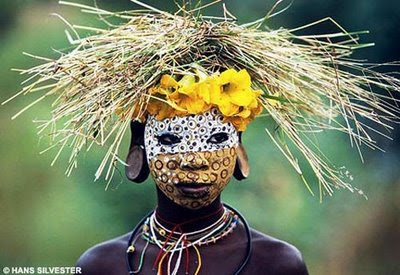 Anyhooo, I'm thinking that, as far as fashionable foliage goes, this look represents the traditional, having been part of humanity's attire for thousands of years. Foliage and flowers, in fact, were the first kinds of clothing ever worn, and these young men and women have mastered the art of accessorizing. 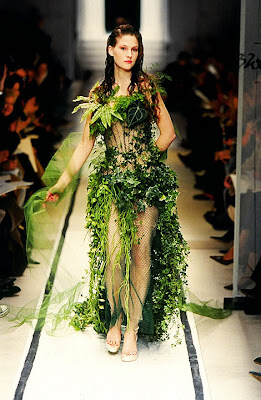 Let's make the leap from Africa to present-day Paris, where fashion-forward models are strolling the runways in their own little leafy get ups. Actually this dress is the creation of plantsman extraordinaire Patrick Blanc, best known for his remarkable wall gardens gracing buildings all over the world (See examples of his work and read an interview here.) A few years ago, he turned to fashion, and designed a wedding dress, which he called the "Robe Vegetale", for couturier Jean-Paul Gaultier. This is definitely a high-end, haute couture approach to wearing plants. 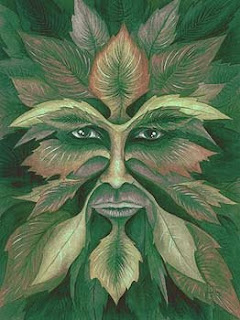 Lastly, there's the fusion approach to the wearin' of the green. This takes us both back and forward in time. Back to the Green Man, the emblematic manifestation of humankind's kinship with the natural world as expressed by dieties and mythic figures linked to agricultural cycles and the plant kingdom. The Green Man has been linked, conceptually at least, to figures such as Osiris, John Barleycorn, Godin, and the Celtic god Viridios, whose name means green man. The Green Man's image-a face emerging from a swirl of leaves and vines, is often depicted on churches and has become a popular garden ornament. Here are several interpretations of the Green Man, including the traditional masklike motif, and a dandefied version painted by Kathleen O'Connell. 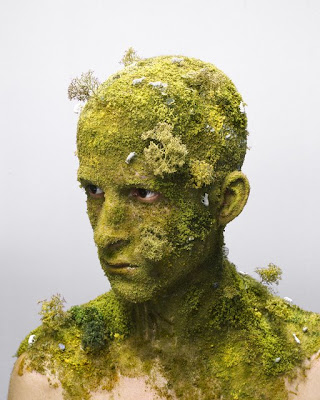 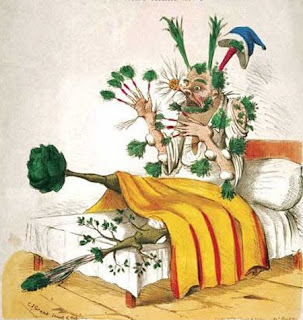 Finally, we race back to the future with this post-modern looking Green Man, whose vague sense of unease may reflect a deep seated uncertainty about contemporary humanity's relationship with nature. Or the image (sorry, no idea who created this intriguing photograph, or the drawing-love to credit them if I could) may simply reflect the understandable angst of waking up one morning to discover that you are half plant.
Posted by Steve Silk at 10:16 PM

What a spectacular post!
I love how you have tied the Green man imagry from Ethiopia( those are amazing) to Patrick Blanc.
Just wonderful.
Philip

Thanks Philip-the unexpected is always fun.

Thanks Anne-I thought it was fun too. Halloween anyone?

Very cool images! As for the last one...I've had that dream numerous times!

Hi there! Very interesting post... I came across your page while researching the idea of the Green Man for a mask I am making. When looking through your photos, I instantly recognized the one of the "postmodern Green Man" near the end as being from an exibition I saw at the Museum of Art & Design a few years ago. I thought you might be interested to know the artist is Levi van Veluw.