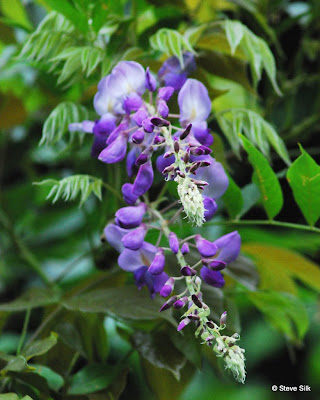 Why won't my wisteria bloom? I can't tell you how many times I've seen this question asked in magazines, newspapers, and the like. Maybe I'm just lucky, but my wisteria not only blooms, it does so three times a season. Once in late spring as per usual, again just now and then yet again later in the season. I reckon this happens because: A) the roots are restricted--yes it's in the ground, but in an island bed in the middle of our patio, so it is, in essence, a small oasis of good soil in an ocean of stone dust and gravel. B) I never feed it. C) It gets cut back-ruthlessly-after every flush of flowers.

But those are just guesses. Maybe it's the way the stars align over Clatter Valley. Or maybe something even more esoteric. Really, I don't know why it happens. Gardens are often full of mysterious, hard-to-explain events? How wonderful is that?
Posted by Steve Silk at 12:23 PM

My wisteria blooms a few times a year too. Not as flush as the first time, but a few blooms. Pretty much neglect mine too!

Is it a frutescens or macrostachys? Those seem to rebloom more readily than the Chinese or Japanese Wisterias. Whatever, it's great to see it reblooming.

I think you're right Sheila--neglect is the key.

you are making a lot of folks jealous.

I think the ruthless cutting back is your key to rebloom Steve.

My wisteria blooms like crazy... but how do you control this vine. I have
literally removed it time after
time and it is back taking over
the side of my house, lawn as well as
the front and back gardens... gorgeous
vine, but love my climate a bit
too much!

Flowrgirl1-Yes, well I'm kind of mystified by it as well. It sure is nice to have some inexplicable good luck in the garden as opposed to all those inexplicable catastrophes.

Carol--I tend to agree. It's like deadheading on a massive scale. That plant just wants so badly to set seed and spread itself around.

Pamela--All you can do is keep whacking it back. Be ruthless. And chop off any suckers that appear.

I planted one in the very small space between the driveway and the house 30+ years ago never a flower! Trust me it gets cut back regularly and severely. After I was told that some seed propagated ones will never bloom I tried to get rid of it about 10 years ago and it still keeps coming back. Now the native ones like W. frutescens 'amethyst falls' bloom at a young age, reliably and several times a season and are not nearly so agressive.

But everyone wants a definitive answer don't they! I have seen wisteria just blooming away in the most awful roadside conditions. Who knows what the final triggers are. The mysteries of horticulture. Maybe this would be a good PHD study.

cool for you. I like the astral theory. some mystery on why things happen is a good thing.