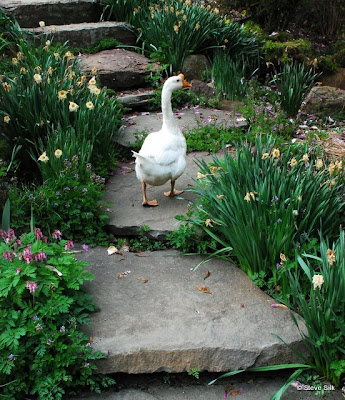 Poor old Sebby. Sebastian, our white Chinese goose, is having tough times. He was raised from a gosling with four ducks, who, now that they are full grown, have turned on their childhood playmate. The ducks are real thugs. They love nothing better than chasing poor Seb out of the pond and away from wherever Seb might be lounging. They hog the food too. Whenever the Artiste, Bird Boy or I catch the ducks doing their terrorist routine, we spread our arms like wings, flap away and charge the ducks--who beat a hasty retreat, just as fast as their stubby, stiff-legged waddle can carry them. Seb runs along right behind us, wings spread, and honking like a taxi in traffic. He loves turning the table on his tormentors.
Because the whole flock of fowl-with also includes a dozen or so chickens-overnights in a coop, we've taken to letting Seb sleep separately, indoors at the house. Birdboy has a room dedicated to his indoor birds, so we've set up a small cage on the floor where Seb can snooze. He loves it. Late in the day he wanders up the stone stairs to the house, ready to come inside. In the morning Seb gets a special treat--he just loves lettuce--then goes out for walk with the Artiste. She takes him down to the pond, where he glides about peacefully for a while, all alone and, for those few precious moments, the proud and graceful master of his domain.
Posted by Steve Silk at 8:47 AM

Poor Seb, he has a rough go of it.

I read this earlier today, and have had Seb on my mind all day (it could be that it's good weather for a duck...).

I am glad that Seb has a flock of his own...even if they don't have feathers!

I was thinking much the same thing that Saucydog said! I love the picture of you all flapping your arms to scare off the ducks...those thugs! gail

I love it when the geese fly over my house in formation, but my garden is way too small for them to visit. One could not imagine the reaction of the felines here. I think Seb is lovely ...

keewee--I'm happy to report that Seb has a new defender. One of the roosters has taken up Seb's cause and somtetimes drives away the bully ducks.

Saucy--It's good to be part of flock! Feathered or otherwise.

Hi Gail--Fortunately no one has video'd us for YouTube. We look pretty silly.

Hi Kathy--We have a cat-no way will Fluff mess with Seb. I love it too when an arrowhead of geese shoots past overhead.