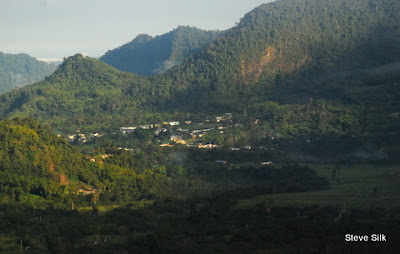 Our ongoing search for magical places that fuse our passions for amazing landscapes, abundant plant life and exotic birds led us to Mindo, Ecuador, a tiny town clinging to the cloud-forested western slopes of the Andes. This teeny little place, not much more than a wide spot in the dirt road, was worth every bit of effort it took to get us there. Even the fruit stands were a work of art. 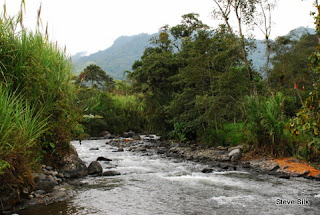 Mindo is all about the river, which thunders down from the mountains to bisect this lush forested valley. The river, with its water-polished stones, and at its side the sleepy, lost-to-the-world ambiance of Mindo itself, made me think of the town as a real-life Macondo, the mythical, mystical village at the center of Gabriel Garcia Marquez's masterpiece "One Hundred Years of Solitude." 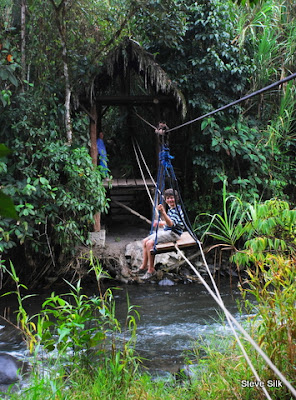 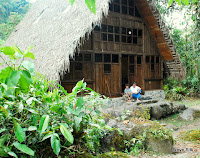 There are few bridges in this part of the world so to cross the flow, we had to hop aboard a tarabita--a sort of hand-hauled cable car with seating for one-to reach our absurdly oversized cabin. Birdboy loved this kind of commute. I did too.
The river's soothing voice was the constant soundtrack as we hiked  local dirt roads and muddy paths, on the lookout for plants (about which more in a future post), birds and other exotica-like giant spiders dangling from huge webs. One night we went hiking in the pitch-black jungle to see nocturnal life-a panoply of even stranger insects and such than we'd seen during the day. 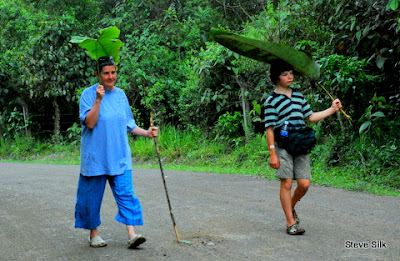 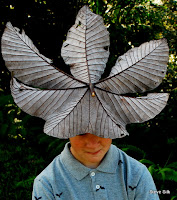 Wherever we walked, outageously oversized tropical foliage was everywhere. It was so tactile, begging to be touched. And it came in handy as umbrellas for the Artiste and Birdboy, and, in the case of this dried out cecropia leaf, a hat.
Our favorite outing took us along a an amazing dirt road (torturous for anyone, like me, with a fear of heights) clinging to the spine of a mountain range just east of Mindo. 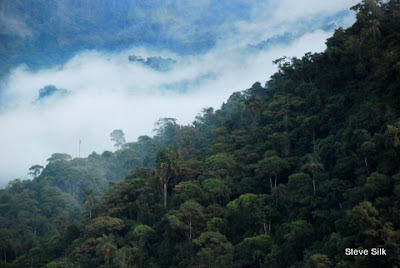 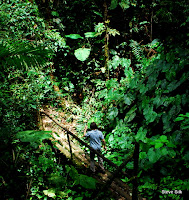 We bumped along for a couple hours befiore dismounting and plunging into steep and deep jungle, where our most excellent guide Fernando led us to a research station in the middle of absolutely nowhere. There we had a tasty surpise-a breakfast of all kinds of fruits, eggs, bread and hot black coffee (all very welcome, since we'd set out well before dawn). We followed paths through valleys darkened by layer after layer after layer of vegetation. Butterflies flitted about, and birdcall--more than 350 species can be found hereabouts--provided a musical soundtrack. Finally we emerged at this spectacular waterfall. 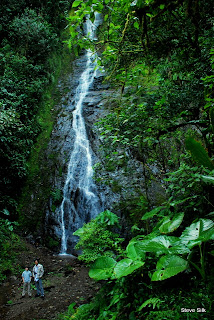 The sheer height of the waterfall, coupled with the massive leaves of the elephant ear in the foreground seemed to complete the notion that we were some kind of Gullivers, adrift in Brobdingnag, where EVERYTHING is bigger than real life. In the end, I had just one question about Mindo: When can we go back?
Posted by Steve Silk at 11:12 AM