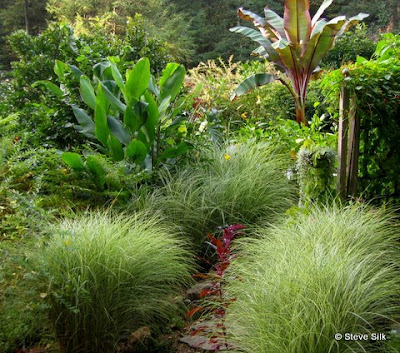 Grasses are the greatest! These easy perennials are a cinch to take care of and I love the dramatic contrasts you can make by juxtaposing the long slender blades of billowy grasses against more dramatic, bold-shaped leaves like those of this red Abyssinian banana (Ensete ventricosum 'Maurelii')and banana canna (Canna musafolia, at left) in this picture of a pathway leading to my banana-bedecked patio. This grass--'Morning Light' Japanese fountain grass (Miscanthus sinensis 'Morning Light') is one of my top favorites for its splendid silvery quality. I love brushing through these mounds of grass when I'm walking on to the patio. It's such a tactile experience!
Posted by Steve Silk at 9:16 AM 4 comments: Links to this post

Life in the Food Chain

So, a fish is floating along, minding his own business...
Posted by Steve Silk at 9:31 AM No comments: Links to this post 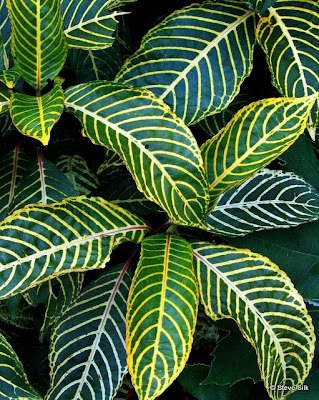 I'm cashing in on gold vein plant (Sanchezia speciosa). Again. This regal foliage plant really pays the rent in mixed containers, in groupings of pots, and, if you've got the right spot, in the ground. I love its more-or-less hand-sized, dark, dark green leaves, with each glossy leaf divided into neat little segments by rich-as-Croesus, buttery colored veins.

This tender tropical is easy to propagate from cuttings so you can amass a bunch, which is a good thing because it makes an utterly stellar background for more finer textured foliage or flowers-- lantanas, for example. And it overwinters easily for me as a houseplant, so getting nice sized specimens -3 or 4 feet tall--is just a matter of patience. Back when I first discovered this plant I had no idea how much I'd come to value it or how much its role as a player in my container creations would expand. Finding gold vein plant was like hitting the motherlode.
Posted by Steve Silk at 9:05 AM 4 comments: Links to this post

Is Magenta a Color, or a State of Mind? 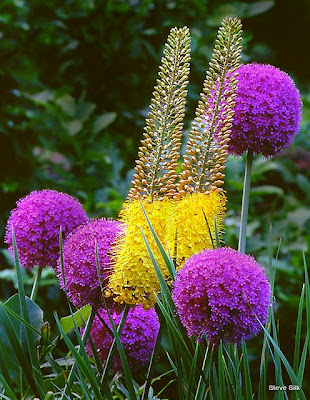 This may fall into the "Too Much Information" category, but here goes: If you think color theory is complicated, well, think again. Turns out, it can be REALLY complicated. According to deep-thinking research, magenta is not a color, which may be news to these alliums. Anyhue, those who are in a position to know say magenta is constructed by our brain in response to conflicting incoming messages from our retina that have been reinterpreted by the mind. Huh? I told you it was complicated.

If you want to go deep geek on the color front, and see a few cool optical color illusions along the way, learn why magenta is not a color here. And, learn a bit about qualia here, or perhaps get a more cogent explanation here at Wikipedia. I'm sure that clears things up. Kidding! I think I'll stick with nice, easy-to-understand color, like blue.

Shout out: boingboing
Posted by Steve Silk at 9:12 AM 10 comments: Links to this post 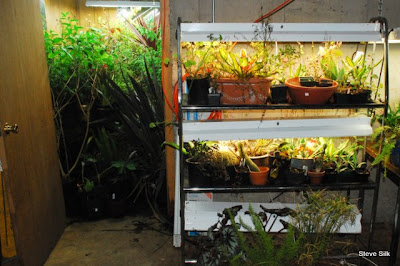 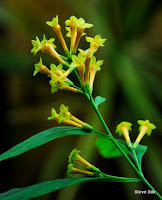 The snow and ice are starting to melt but signs of spring are still a bit hard to find. But down in the basement, my subterranean garden is happily waiting out winter's worst. There huddle many of my tender treasures, my agaves and bomeliads, my abutilons, begonias, plumbagos, fuschias, and cestrums --like 'Orange Peel' pictured (yep, it's flowering down there). Basically, it's whatever I can stuff down there that has a chance of surviving. I've got three areas--two cool ones--temps 40s to 50s--one with light and one without, and a warm spot--low 60s--with lights. I recently switched from using an energy pig of a high-intensity discharge light to using 1/2-inch florescents, which use even less energy than regular florescents. And guess what? The low-cost lights are working better than the pricey ones did. All the lights are on a timer for 18 hour days. 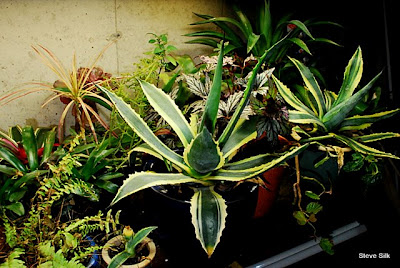 I go all out in container gardening once the season rolls around and these are my secret weapons, wintered-over plants that give me lots of material for cuttings and lots of plus-sized plants for dramatic display. It's also amazing how many tropical shrubs -as well as bulbs, tubers, and rhizomes--can wait it out in the dark and dry in a state of totally dormancy. And as they sit patiently, the plants always manage to remind me that--no matter how interminable winter may seem--spring is also a state of mind. One I can even nurture under ground.
Posted by Steve Silk at 9:17 AM 3 comments: Links to this post 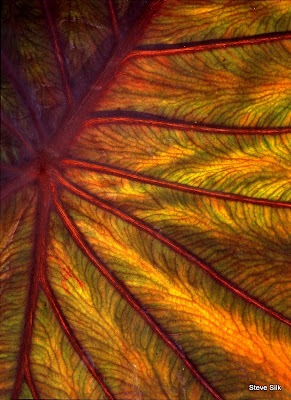 The beauty of backlighting shines through, so to speak, in this picture of an elephant ear's innards illuminated by the sun. Who would have guessed the leaf of 'Black Magic' elephant (Colocasia esculenta 'Black Magic') would look like an aerial view of a river valley. But seeing this taught me a lesson: when using interesting foliage plants in pots or elsewhere, it's often a good idea to position them so the rising or setting sun can shine though the leaves, revealing, in some cases, an intriguing inner landscape. The same approach also works well with some other dark foliaged plants--particularly tropical smokebush (Euphorbia cotinifolia)--bringing a whole new glow to the plant.
Posted by Steve Silk at 9:55 AM 4 comments: Links to this post

Three Things I Hate to See 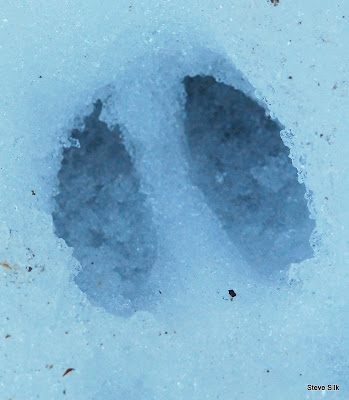 Living in the woods is great, but sometimes you have to pay dues. We've had a tough winter, with deep snow and ice cover for more than two months. And not much to eat for the deer, especially since there were almost no acorns in fall. I've defended my garden with a vast deer fence to keep the critters out, but the trouble is, in winters like this one, starvation leads them down the driveway--it's an easy meander because the plow has cleared a path--that leads right to my salad bar, er, garden.

Just a couple visits can do a lot of damage. If the deer are hungry enough, they will eat almost anything green. Don't believe those lists of deer-proof plants you see. There's no such thing as a deer-proof plant. I've seen them eat hellebores to the ground. And then there are the bucks, who delight in rubbing their antlers against small trees with a caliper of one- to two-inches. They've killed many a sapling here--magnolias, Japanese maples and more--by girdling the tree, rubbing off the bark all the way around. They didn't do that to this striped maple (Acer pensylvanicum), which I hope will survive. Lastly, bucks and does alike add insult to injury by leaving little mounds of their calling cards everywhere. 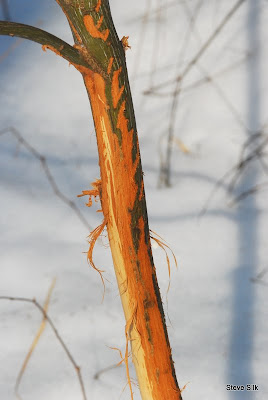 Posted by Steve Silk at 1:17 PM 6 comments: Links to this post 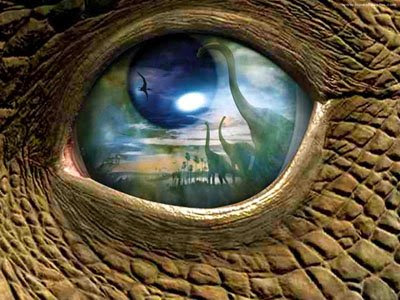 There may be a Jurassic Park yet. French and Spanish scientists recently succeeded in briefly resurrecting, by cloning techniques, an extinct animal, the Pyrenean ibex. The species went extinct in the year 2000, and the clone lived for only 7 minutes. But it's a start. So what's next, velociraptors? Read all about it at Ecoworldly.
Posted by Steve Silk at 9:00 AM 4 comments: Links to this post 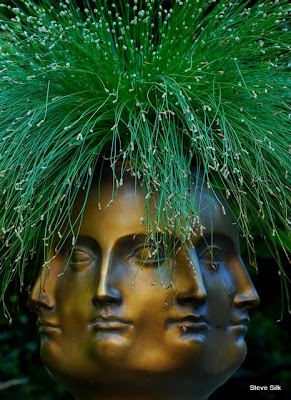 What's not to like about fiber optic grass (Scirpus cernus, aka Isolepsis cernus)? This twee little rush adds interest to almost any planting by virtue of its silly, Dr. Seussical appearance and its appealing texture. You just just want to touch this thing. Easy-peasy to grow (as long as it gets plenty of water), fiber optic grass make a tidy dome to about 12 inches high and wide. It's an annual, unless you're in Zone 9. Good in the ground or in containers. It also makes a great fright wig if you've got the right pot.
Posted by Steve Silk at 9:31 AM 3 comments: Links to this post 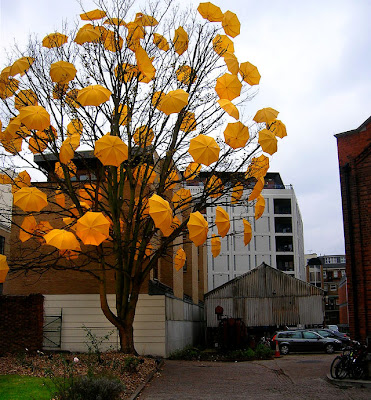 Shout-out to Dark Roasted Blend.
Posted by Steve Silk at 9:06 AM 4 comments: Links to this post

Ace New York Times garden writer Anne Raver attended the recent Plant-O-Rama confab at Brooklyn Botanic Garden, where she got a feel for which plants are hot and which are not from speakers including Dan Hinkley, Ken Druse and Michael Dosman , of Harvard's Arnold Arboretum. In large part, they see a return to tried-and-true plants. But no late winter garden story would be complete without mention of several highly desirable new plants, and Raver includes several relatively new worthies suggested by Dan Hinkley. For her account, go here.
Posted by Steve Silk at 10:39 AM No comments: Links to this post

Energy is a Good Thing

With other writing deadlines looming, I've had a tough time posting lately. Perhaps if I had this kid's energy, there wouldn't be a problem. The lad is not only full of vim and vigor, he's curious too-not a thing in the room goes untouched during his excellent adventure. If only we could harness that energy and put it to work in the garden.

Tip o' the hat to boingboing.
Posted by Steve Silk at 9:37 AM 1 comment: Links to this post